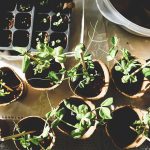 Your baby plants come up and all is well. Then the stem gets a pinched appearance right at the soil line, the seedling flops over, and the whole thing soon withers and dies. Damping-off can be a problem for even the most experienced seed starters and is probably the single biggest problem for gardeners who start their seedlings indoors.

Plants that are attacked by the fungi but do not damp-off are often stunted. A constricted stem at or just below the soil line is a sign that the plant underwent a fungus attack during the growing season.

Damping-off is caused by several soil-borne fungi including Pythium, Rhizoctonia, Fusarium and Phytophthora species. These fungi occur in all soils, are water loving organisms, and thrive in wet or poorly drained soils. Slow-growing or weak plants are more susceptible to damping-off than vigorous fast-growing seedlings. If the plant can grow roots faster than the fungus can decay them, the plant will survive.

A combination of overly moist potting mix, poorly drained containers and lack of good air circulation, low soil temperatures before germination and high soil temperatures after emergence can contribute to the onset of damping-off. This type of early root rot can also occur by using seed starting trays and potting soil that may have been infected.

Prevention is the key to managing damping-off. Using a sterile soil for indoor plantings, observing proper watering practices and making sure flats and pots have good air circulation are helpful measures. Disinfecting tools and work benches along with sanitizing your trays with a mild bleach and water solution before re-using them, or using new trays each time are effective preventions.

Also, it is important to get seeds to germinate fast. To accomplish this use adequate lighting and heating. If you can, use bottom heat as it will speed up germination. Do not plant seed too deep as it will put stress on the seedling trying to reach the surface and expose it for a longer period of time to potential pathogens in the soil.

Lastly, a fungicide can be used to protect seeds. This can be done by misting seedlings once or twice per day with naturally occurring anti-fungal agents such as chamomile tea or clove tea, or a one-time light dusting of powdered cinnamon or charcoal on the soil surface.

Stronger chemical fungicides are not recommended for use by recreational home gardeners. A safer alternative is to use seeds that have been treated with a fungicide. Commercially treated seeds have a colored coating on them and should be used for planting only.